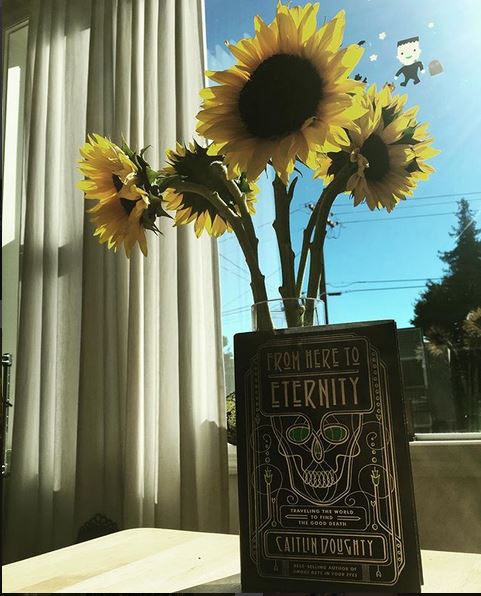 I have a strange relationship with death.

When I was 8 years old, my father died. That night, and other aspects of his death, have inevitably stitched themselves into my memory.

That being said, while having that happen at such a young age was tragic, it also made me contemplate mortality from a young age. I grew up fascinated with what it means to die. Over time, as the raw pain dulled to the occasional pang of loss, and as I grew older, I found comfort in reshaping how I thought of death.

After reading “From Here to Eternity: Traveling the World to Find the Good Death,” by Caitlin Doughty, I had this sense of immense peace, the feeling that I’m not alone — of course I’m not.

Doughty explores how different cultures from around the world deal with death of loved ones. She takes us to Indonesia, where mourners gently care for the the mummified bodies of their loved ones in their homes. She shows us the Bolivian natitas, human skulls that are thought to give blessings to those who care for them. She visits Japan, where we learn about the columbarium filled with thousands of Buddha statues that light up to guide mourners to the ashes of their loved ones.

In my favorite part of the book, she shows us the beautiful aspects of Días de los Muertos. From the little I’ve been exposed to Mexican traditions while living in Tucson and in different spots on the West Coast, I’ve always found their relationship with death to be comforting, healing, and inspiring. Doughty touches on this.

“Mexican poet Octavio Paz famously said that while citizens of Western cities like New York, Paris and London would ‘burn their lips’ if they so much as uttered the word ‘death,’ ‘the Mexican, on the other hand, frequents it, mocks it, caresses it, sleeps with it, entertains it; it is one of his favorite playthings and his most enduring love.”

“In recent years, many cities in the United States have begun holding events for Días de los Muertos, including a massive celebration at Hollywood Forever Cemetery…but in feeling and emotion it falls miles short of Tzintzuntzan’s. It felt safe inside the walls of this cemetery, like being in the center of a glowing beating heart.”

There are so many other parts of the book that are wonderful as well. But perhaps the most intriguing part of the book is how Doughty sees the funeral industry in America. She talks about a few unique practices here, such as a town in Colorado where loved ones can be cremated on a large pyre. To some, this might sound way too…old school or unsettling. But that’s the beauty of this book, and Doughty as a writer, is being able to look at death in a new, more intimate way: “After a few minutes the whirlwinds dispersed, and glowing red flames danced in their place. The fire gathered strength, shooting up six feet high. The mourners, all 130 of them, ringed the pyre in silence. The only sound was the pop of flaming wood, as if one by one Laura’s memories were diffusing into the ether.”

Here in America, and in other parts of the world, it seems that the more we’ve advanced as a society, the less we have taken the time to truly mourn the dead. When my father died, the whole process happened so quickly. He died in a car accident on his way out to Arizona while we were moving from Ohio.

I don’t remember much other than the call that night, the instant terrified feeling. The next memory I have is seeing his body in the funeral home, in a coffin, and being so scared of him. That wasn’t my dad. That couldn’t be my dad.

The thing is, though, is that was my dad. He just happened to be dead. I would give anything to go back in time, to tell my younger self to not be scared of him, to touch his hand one last time without fear. I would tell myself it’s OK to mourn for as long as I needed to. I would tell myself that mourning doesn’t have to mean despair, but celebration as well.

The next memory I have is standing in the cemetery, hearing members of the armed forces shooting guns. I didn’t really understand why.

In retrospect, it all seemed so fast. In less than a week, my life was completely upended and my father was in the ground. I can’t speak for anyone else, but I saw the pain being pushed away, fought against, by my family. I think a lot of people might do this in America — push away the memories, the celebration, because the thought of saying goodbye is too much to handle.

That’s why this book is such an important read. Seeing how other cultures around the world embrace death is refreshing and beautiful, and it makes me feel a sense of solidarity. I’ll leave this with one of my favorite quotes from the book, and something I wish I could have understood at my dad’s funeral when I was a kid.

“Insist on going to the cremation, insist on going to the burial. Insist on being involved, even if it is just brushing your mother’s hair as she lies in her casket. Insist on applying her favorite shade of lipstick, the one she wouldn’t dream of going to the grave without. Insist on cutting a small lock of her hair to place in a locket or a ring. Do not be afraid. These are human acts, acts of bravery and love in the face of death and loss.”

All the social media things